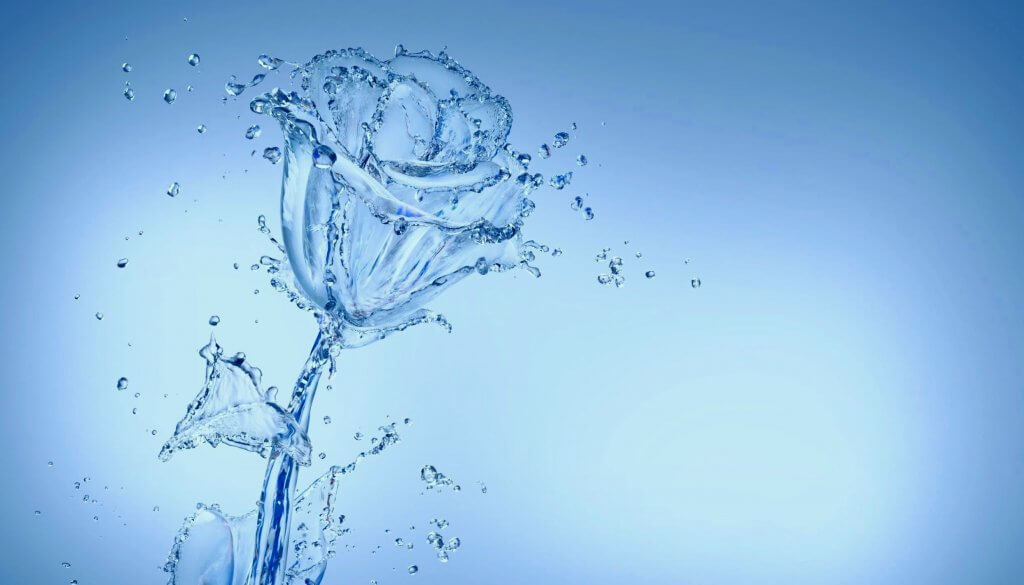 The Secret Behind The Power Of Our PT Spray And Washdown

Offensive odors have plagued mankind since the dawn of creation. While they might have been tolerated throughout most of human history, they were far from appreciated, since there were no viable solutions.

Over the course of the last two centuries particularly improvements in sewage systems, garbage collection and other control measures have somewhat ameliorated the situation, but in the case of portable toilets, malodors, in many instances, still reign supreme. One can only ask, Why is this so?

Bacteria Is Generally The Culprit For Bad Odors

It is the rapid growth of gram-positive bacteria prevalent in human waste products that is responsible for portable toilet malodors. There are three groups of chemical amalgams that contribute to this very smelly fact. They are: fatty acids, sulfur, and nitrogen-containing compounds. Smell is highly dependant on an odor threshold, which refers to the concentration necessary for the human nose to detect it.

In the case of sulfur-containing compounds, which are the primary contributors to fecal odors, this level is very low. This translates into the fact that our noses can detect them in even the most miniscule amounts.

Many diverse compounds can affect the smells found in urine as well. The urea in urine is has no odor at all, but it can quickly break down into nitrogen-containing compounds, such as ammonia and trimethylamine, that positively stink. Ammonia has a pungent smell but a higher odor threshold than trimethylamine, which is fishy in nature. Due to the fact that these smelly compounds are continuously created, the odor of stale urine is always much worse than fresh urine.

If this bacterial expose´ seems like so much more than anyone just having to use the portable restroom needs to know, there is a reason for the explanation of this smelly madness.

The more knowledge researchers have about the chemicals that cause the malodors, the better the air freshening and odor-control products the experts at Surco can design to combat and neutralize them. Far loftier is the possible discernment about a person’s health from the odor of their waste products.

While not an enviable environment, it is a position that many chemists have found themselves in as they carry out important studies in efforts to connect the concentrations of some of these volatile compounds to the incidence of disease in their test subjects. This in turn can potentially lead to the development of new diagnostic strategies for combating serious illnesses such as cancer and liver disorders.

Also sulfur odors from hydrogen sulfide (H2S) are most prevalent and the more offensive of the two odors you’ll find in portable restroom cabins. According to the OSHA, the Occupational Safety And Health Administration, “hydrogen sulfide is colorless gas with a rotten egg smell and is produced by bacterial breakdown of organic materials and human and animal wastes such as sewage and fecal matter.

Some common names for the gas include sewer gas, stink damp, swamp gas and manure gas.

How Did Portable Toilet Owners Fight Off Odors In The Past?

The rich history of portable restrooms began during the turbulent years of World War II. The very first portable toilets were invented to accommodate the crews of many ships at sea, who were away from shore for long periods of time.

These early structures were purely Spartan in concept and constructed of wood and metal. This made them very heavy and more difficult to transport and empty when the ship did reach a dock. These early portable toilets were difficult to keep clean, always lacking hand sanitizer and never failing to stink like high heaven.

The newer and lighter materials used in construction in later years as well as the timely invention and introduction of the “blue liquid” portable restroom deodorizer were huge improvements to the portable toilet industry.

These early deodorizerscontained formaldehyde-based chemical blends that helped cover up waste, mask bad odors and keep portable restrooms clean, but they later proved to be unhealthy for humans. This caused the portable sanitation industry in the 1970s to move towards less toxic, non-formaldehyde biocides that inhibited the growth of odor-producing gram-positive bacteria and were easier for wastewater treatment plants to process.

Other modernizations, such as the introduction of fiberglass portable restrooms, greatly improved the ease of transport and cleanliness of the portable toilet user experience, but it was a very fragile material that absorbed odors and held onto them.  The polyethylene portable restroom soon replaced the fiberglass in the 1970s and they were much more durable, lighter and easier to move.

To this day, polyethylene restrooms are more resilient and their useful life can extend more than 10 years. This allowed for both an increase in portable restroom numbers and in the number of providers and distributors of odor control products.

More than 2.5 billion people lack proper sanitation worldwide, leading to various health conditions that contribute substantially to the global burden of disease in developing countries. The goal of the Reinvent the Toilet Challenge (RTTC), sponsored by the Bill and Melinda Gates Foundation is to provide sustainable sanitation facilities to different cultures such as India and Africa including waste management and cleaning cycles to help maintain hygienic conditions.

There is also the consideration of the olfactory experience associated with toilet use because in addition to providing a pleasant aroma, there is also the accompanying perception of cleanliness.

In the words of Dr. Phil McGraw when referring to warring and dysfunctional family factions, the solution requires the efforts of a hero.

When it comes to challenging odor causing portable restroom bacteria, not just any hero will do. There is only one exceptional fighting spirit that can save this smelly day, albeit no cape or magical planetary powers are involved.

Modern science created this superhero; well, to be more exact, the scientists at the Pittsburgh Surco Technological Center. We came through a number of years ago with the invention and introduction of our pride and joy, Metazene.

For many, the iconic gorilla who met his celluloid end atop the Empire State building more than 80 years ago might be and outdated image.

Still, his name lives on and is synonymous with brute strength even though superheroes must often disguise their powers as they interface with their fictive societies. Bacterial fighters, however, live in the real world. They wear no capes and have no need to hide behind mild mannered, be-spectacled identities such as newspaper reporter, Clark Kent. They do, however, sit quietly and patiently wherever odor-causing bacteria live, just waiting for the right moment to explode upon the smelly scene.

Superheroes can live anywhere and they are made every day in the Surco Technology Center in Pittsburgh under the name of Metazene.

What Exactly Is Metazene And Why Is It So Powerful?

We’ve written extensively about the power of Metazene on our blog, and whether its us touting its strength or others, the consistent resonating voice cements the fact that there is nothing on the market today that can compare to the odor-fighting properties found in Metazene®.

Its ability to combat and annihilate malodors lies in its mode of attack, which occurs on a molecular level. Perfume and water are the components of most other odor neutralizers that depend on enzymes to cause a microbial action that will digest and thereby eliminate malodors derived from mildew, mold, smoke, urine and garbage. This method is not very effective.

Metazene not only controls existing airborne malodors, to some extent and depending upon application, it can also restrict the occurrence of emerging odors. This is due to its extremely low vapor pressure.

Odor molecules that come into contact with Metazene either in the form of portable toilet spays or washdown deodorants are either lessened or negated through the processes of hydrogen-bonding, adsorption (No misspelling here — absorption is the process in which a fluid is dissolved by a liquid or a solid. Adsorption refers to the adhesion of atoms, ions or molecules from a gas, liquid or dissolved solid to a surface) and encapsulation.

Metazene’s direct application into many plant-processing operations such as wastewater treatment plants, landfills, stack emissions and others, has opened the door to tremendous marketing opportunities.

Odorless deodorization is becoming more and more the norm in public bathrooms as well. Chemical control measures in the form of Metazene–infused products such as bio-degradable, scented vinyl urinal screens that maintain a scent for up to 30 days, portable toilet sprays and washdown deodorants, all of which contain no harsh chemicals such as formaldehyde, will please even the most assiduously environmentally-aware customer.

Metazene works well in water with the inclusion of an emulsifying agent, surfactant, detergent, wetting or foaming agent and dispersants.

Surco and Our Metazene-Infused PT Products

We are a world leader in portable sanitation odor solutions. Headquartered in Pittsburgh, Pennsylvania, all of our products are non-toxic and designed to control odors in a variety of scents that will keep portable toilets fresh and clean at all times. In continuous operation for seven decades, we have rolled with the times, becoming both an advocate and purveyor of ‘green’ products that are environmentally friendly.

Using deodorizers for portable restrooms is not and should not ever be considered as optional. Their benefits render them a necessity.

When dealing with wash down, our Potty Fresh Plus Spray and Washroom Deodorant is the perfect way to freshen the air in portable toilets and provide superior odor control. Its deep cleaning penetration formula is specifically designed to tackle the toughest dirt and grime, and it is the ideal choice in hot weather and high traffic situations. It is a versatile product, as it can be used straight or mixed with water and is easily applied to walls and ceilings for added odor control. 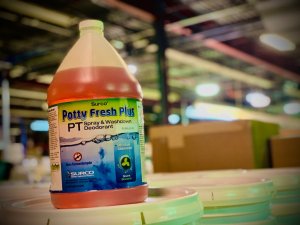 The Potty Fresh Plus Spray and Washroom Deodorant begin to work the moment the spray discharges micro-droplets of water that pass through the aerosol valve and into the air.

In a matter of nano-seconds, these globules burst into a gas, leaving Metazene and any perfume lingering in the air as extremely fine and tiny droplets. They are so small that they float in the air for six minutes to an hour or more. This renders them extremely efficient malodor killers. Also, for enhanced odor control, we recommend utilizing Potty Fresh Plus Spray and Washdown in conjunction with Potty Fresh Plus PT Deodorant and our Fresh Straps.

So look no more for portable toilet odor solutions. Metazene-infused products are ready and willing to serve all those in need of help. Call us today, and whether you are a seller, a distributor, would like to become a distributor, come face to face with your super hero today.

What you see is that the most outstanding feature of life’s history is a constant domination by bacteria. ~ Stephen Jay Gould 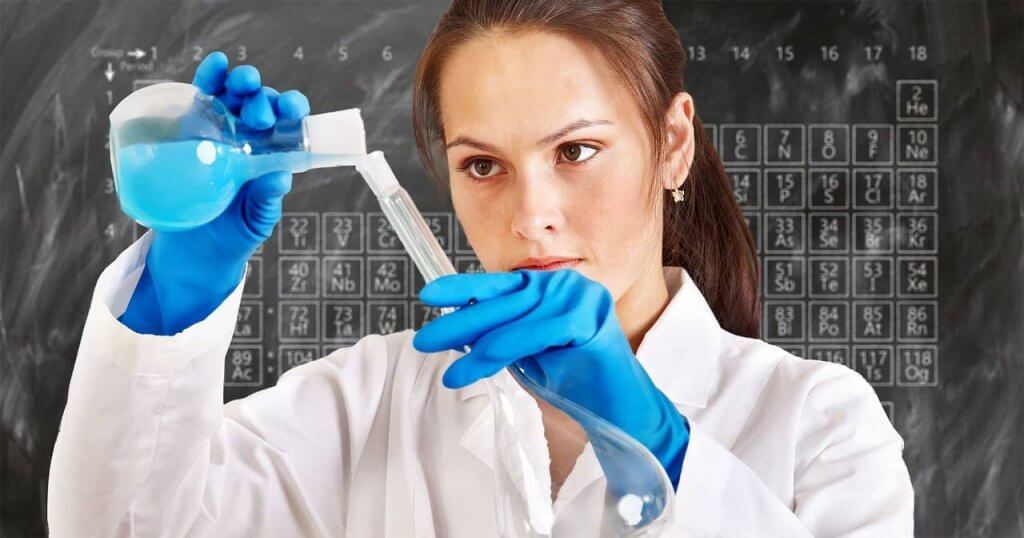 What Are The Key Ingredients Of Toilet Odor Control Products

Portable toilets have been around since the turbulent days of World War II, and they were initially intended for the war effort. According to the Portable Sanitation Association International (PSAI), make-shift, sturdy and sanitary portable toilets became a necessity while establishing …