Become An American Re-Distributor
Of Our PT Odor Control Products

Of all the nations in the world that Surco services with its excellent odor-control products, its home base in the United States is by far the most prolific. Communication between distributors and the Mother company is more accessible than it ever could be in the more remote corners of the globe, albeit Surco is always there to offer help and support to its many distributors, no matter where they may be located.

Surco has been in continuous operation since 1946 and our sophisticated, top-of-the-line odor-control strategies and solutions far surpass portable sanitation industry standards. We maintain enduring bonds with all of our employees and our relationships with stocking distributors and re-distributors throughout the United Sates represent low risk opportunities with high profit potential while providing the most superior products in the marketplace.

As an international leader in the provision of odor control and air freshening solutions for the portable sanitation industry, we stand behind all of our odor-control products and the distributors who sell them. Read more below, or click here to discover the driving force behind our leading position in the portable toilet odor control industry. 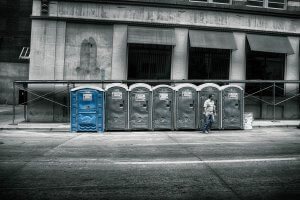 The Modern American Entrepreneur And The Portable Toilet Industry

Although there are those who would argue that our economy is not what it what once was, in between the admittedly sobering statistics, there shines the ranking published last year of global economic competitiveness in which America rose from third place to second, ranking below only Switzerland. The winning variable is America’s enduring culture of innovation and entrepreneurship specifically that dates back to the nation’s early beginnings.

Modern successful American entrepreneurs hail from every walk of life and include among many others such brilliant people as Apple CEO, Steve Jobs; Microsoft’s Bill Gates and talk show host / global brand maker, Oprah Winfrey. According to the Kauffman Foundation, a think tank known for its work on entrepreneurship, the approximately 4 million firms created in the last ten years have had a powerful impact on job creation and innovation are less responsive to downward spirals in the economy.

The portable toilet industry was born in America during the turbulent years of World War II. Heavy wood and metal portable restrooms were installed aboard ships to accommodate crews who were at sea for long periods of time. These structures were impracticable and utilized formaldehyde and other caustic chemicals, which were later replaced with lighter fiberglass portable toilets and non-toxic materials to control the malodors of waste.

The modern portable toilet industry in America has had its ups and downs. Over the course of the last five years, rising construction investments and the growing popularity of outdoor weddings and other special eventshave brought about an increase in the demand for portable restrooms. It is estimated that by the year 2022, revenue will continue to increase as well as environmental regulation, which is certain to result in higher compliance costs for industry proprietors.

According to Karleen Kos, executive director of the Portable Sanitation Association International, a trade group based in Bloomington, Minnesota: “The next wave of innovation is expected to arise from research funded by the Bill & Melinda Gates Foundation, which is sponsoring an initiative to “reinvent the toilet.” The Seattle-based nonprofit is seeking waterless designs that can function in arid locales.”

No matter how many portable toilet companies may exist in The United States, the one variable that is constant among them all is the ongoing need for superior odor-control solutions that guarantee portable restrooms will operate at optimum efficiency while eliminating bad odors with patented molecular odor neutralizing force.  This is the opening a Surco distributor can hope to start with. Convincing one company to try a Surco product just one time is certain to get the ball rolling. Persistence and hard work will yield the rest!

So give us a call or submit an inquiry for more information about becoming a stocking distributor or redistributor of Surco products today!

SPEAK WITH OUR TEAM »

The American Frontier And The Entrepreneur

In this land whose name is synonymous with freedom and opportunity, the American spirit has created a special breed of entrepreneur who works hard and dreams big. Their life force is a modernized version of the old frontier mentality, which forced a specific view of survival focused on the one hand with combating native Americans who had some nerve being angered about their land being stolen, and on the other, with developing a will to not only survive but to also excel.

Personal hygiene in the Old West was not a priority. Disease, such as dysentery, poor diets and infestations of bed bugs, flea and lice made life an unpleasant struggle. Toilets were often a cleared area behind a tree or in the woods. Most homes had a chamber pot, but there were also indoor and outdoor privies (outhouses). There were no odor-control products back then and toilet paper before 1880 didn’t exist. People used grass, corncobs or other similar things.

A Short History of American Entrepreneurship

Risk-takers and innovators seeking religious asylum and new opportunities were the founders of the American nation. Throughout the history of the United States, immigrants have played a significant role in entrepreneurship. America is the birthplace of many notable innovators such as Thomas Edison, Andrew Carnegie, Henry Ford, Henry Kaiser and Benjamin Franklin, just to name a few. The very first capitalists were the early setters who engaged in trade and barter with the native-Americans.

In the period following the Civil War, westward expansion, and the creation of the railroad, governmental incentives and subsidies for industries such as railroad, banking, and land acquisition all led to tremendous opportunities for profit. By the later part of the 19th century, entrepreneurs flourished and were considered among the richest elite. This time period was the perfect ambiance for creating capitalists, innovators, prospectors, financiers who could provide funding, and businessmen who were not only creating startups but also expanding pre-existing businesses.